The “My super lockdown story” competition launched late last year and aimed to engage students during the lockdown period. Students were encouraged to put their writing skills to the test and share their quarantine story. Winners received a school fees grant of $100 to support them ahead of the coming school year. The competition received 167 essays and were then evaluated by Edwin Kibuuka and Ekili Walis, two teachers chosen by BIC and African Queen. The five winning essays were chosen based on their creativity and originality. They were written by:

Here is an extract from Nakato Jolly story:

Representatives from African Queen and BIC including Ivan Manzi, Head of Sales-Marketing & customer service of African Queen, and Richard Mugenyi, BIC’s Associate Sales Manager for Uganda, thanked the winners and encouraged them once again to keep using BIC Cristal pens as they prepare to go back to school.

ABOUT BIC
BIC is a world leader in stationery, lighters, and shavers. For more than 75 years, the Company has honored the tradition of providing high-quality, affordable products to consumers everywhere. Through this unwavering dedication, BIC has become one of the most recognized brands and is a trademark registered worldwide. Today, BIC products are sold in more than 160 countries around the world and feature iconic brands such as Cello®, Conté®, BIC FlexTM, Lucky Stationery, Made For YOUTM, Soleil®, Tipp-Ex®, Wite-Out® and more. In 2019, BIC Net Sales were 1,949.4 million euros. The Company is listed on “Euronext Paris,” is part of the SBF120 and CAC Mid 60 indexes and is recognized for its commitment to sustainable development and education. It received an A- Leadership score from CDP. For more, visit www.bicworld.com or follow us on LinkedIn, Instagram, Twitter, or YouTube.

ABOUT AFRICAN QUEEN:
African Queen is a leading distributor specializing in importing and distributing fast-moving consumer good and BIC’s sole distributor in Uganda. The company has been in the import & export business for the past 26 years. African Queen is a privately owned organization with a large-scale business of importation and distribution of Fast-Moving Consumer goods in the categories of Personal Care (Hair and Skin), Stationery, Home care, and Foods and Beverages. visit www.africanqueen.co.ug or follow us on LinkedIn, Instagram, or Twitter, 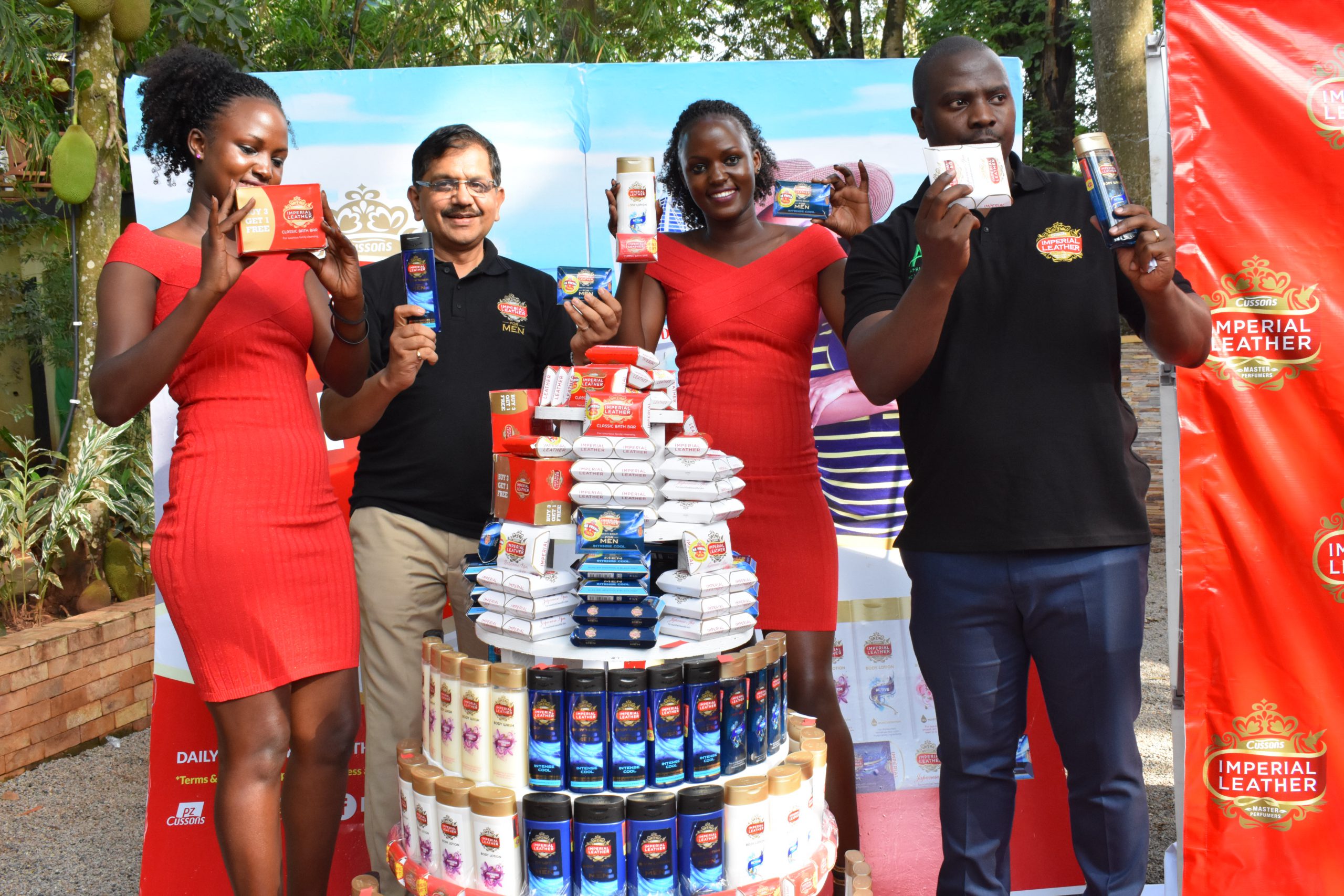 Global personal care products manufacturer PZ Cussons, through its sole distributor in Uganda African Queen No. 1 Distributor Ltd, is ramping up the positioning of its flagship brand Imperial Leather, as the number 1 personal care brand in a new campaign dubbed ‘Be Fresh & Win’ aimed at rewarding consumers in cash & luxury holidays over the next 3 months.

Consumers will scratch to reveal the unique code on soaps, lotions & shower gels, send it to 8008 by SMS to stand a chance to win millions of prizes on daily, weekly, monthly & grand draws.

The brand has over time gained a firm footing in the Uganda market with a solid base of consumers. PZ Cussons Managing Director Sekar Ramamoorthy noted that Imperial Leather consumers have embraced its new full range of personal care products that include Men’s
grooming products, bath soaps & lotions due to their signature scents fragrances and longevity.

“Our 2019 strategic mission is to raise the profile of Imperial Leather as a luxury lifestyle brand which delivers amazing experiences and is always part of the process where exciting memories are made,” he explained.

Innocent Tibayeita, AQ Managing Director, posited that young Ugandans were fast becoming the leading force of the consumer market and that PZ Cussons has invested heavily in building an understanding of their lifestyle aspirations and where luxury fits in their world.

He also explained that one key emerging insight in this generation of consumers, is that they want personalized products that cater for their unique needs & not necessarily one product for the whole family. Research shows that beyond 2020, the consumer group will utilize brands that
match their aspirations and drive for meaning. As a result, it has become necessary to introduce to them a wide variety of well packaged, designed and scented products that match their aspirations while remaining affordable.

Hence the brand has also launched a new variant to their portfolio namely; Japanese Spa which is enriched with Jasmine, Green tea & Rice milk which are great skin moisturizers. This is in addition to the Intense Cool Men’s grooming range which has fast gained traction in the market. “We are investing more in educating male consumers on the need for better personal grooming.

The current campaign will take up at least UGX 1B including luxury luxurious holiday rewards to local and foreign exotic destinations,” he announced.

According to Mr. Tibayeita, the 2019 Be Fresh & Win Imperial Leather national consumer campaign is designed to reinforce Imperial Leather’s number 1 position in the personal care category. The program campaign will run for the period between October 2019 and January
2020.

PZ Cussons strives to enhance the lives of consumers in the East African market through quality, value and innovative products created from in-depth local knowledge of consumer needs combined with global know-how and best practice. Other PZ Cussons Personal Care brands are Cussons Baby, Venus as well as Morning Fresh, a homecare brand. A publicly traded company on the London Stock Exchange, PZ Cussons operates worldwide and has been doing business in Africa for more than a century.

Housewife Wins Shs. 10million in “Be Fresh And Win” Campaign

Kampala – 29 th January, 2020: PZ Cussons through its sole distributor, African Queen No.1 Distributor Limited have today held the final award ceremony of the “Be Fresh and Win” campaign’s Grand Prize winners at their offices in Namanve.

The 15-week promotion that was launched on 14 th October 2019 has seen a total of 6,487 winners throughout the period until last week when the Grand Finale was held.

Speaking at the award ceremony, Manzi Ivan, the Head of Sales, Marketing and Customer Service at African Queen No.1 Distributor Limited noted that they have been able to interact with the consumers of the brand products and bring closer the luxurious touch of the brand.

“As a business, it is our mission to efficiently distribute quality products that delight our customers and deliver sustainable stakeholder value, hence our endless efforts to reward our consumers for making us the No.1 leading distributors of consumer goods through purchase of our products.” Manzi said, adding that, “through this Ushs 1 billion promotion, we have registered thousands of daily and weekly participants in the campaign and gone ahead to reward over 6,400 winners”

In her victory speech, the grand prize winner of Ushs 10 million, Doreen Nabakooza, a housewife based in Nansana said she had for long wanted to venture into business but lacked the capital.

An excited Nabakooba said that, “I still cannot believe it and do not know what to say to show my gratitude to PZ Cussons for putting up thing promotion,” remarking that, “I plan to use this money to start the business of my dreams so that I can support my family and meet their day-to-day needs” “I encourage all Ugandans to start using PZ Cussons products because they have changed my life and empowered me economically,” she concluded.

Another winner, Kitego David, a primary school teacher at St. Catherine Day and Boarding school who won Ushs 3 million thanked PZ Cussons for easing his financial burden. He said that, “Considering the fact that it is the back to school season, I will use part of the money to pay fees and the balance to re-stock my small kiosk with more products.” David mentioned.

On receiving his dummy ticket, Mr. Ssali John, a transport coordinator at Entebbe International Airport said he came for the prize without expecting much as he says seeing is believing. He exclaimed that, “I have never flown in an airplane despite working at the airport!” adding that, “this trip to the world’s top tourist destinations has come as a great gift to me from PZ Cussons in this new decade and is a lifetime
milestone I will treasure forever!”

Imperial Leather, for the past 15 weeks, has rewarded its customers with luxurious prizes such as daily & weekly cash prizes, trips to Ssese Island, fully paid trips to Dubai for two, hampers and airtime for their loyalty to their personal care brands

The draws of the promotion happened daily, weekly and monthly with customers sending the scratch codes found on the bought products to 8008 to stand a chance to be among the winners.

About PZ Cussons:
PZ Cussons strives to enhance the lives of consumers in the East African market through quality,
value and innovative products created from in-depth local knowledge of consumer needs
combined with global know-how and best practice. Other PZ Cussons Personal Care brands are
Cussons Baby, Venus as well as Morning Fresh, a homecare brand. A publicly traded company
on the London Stock Exchange, PZ Cussons operates worldwide and has been doing business in
Africa for more than a century.